Lee is a Man With a Plan 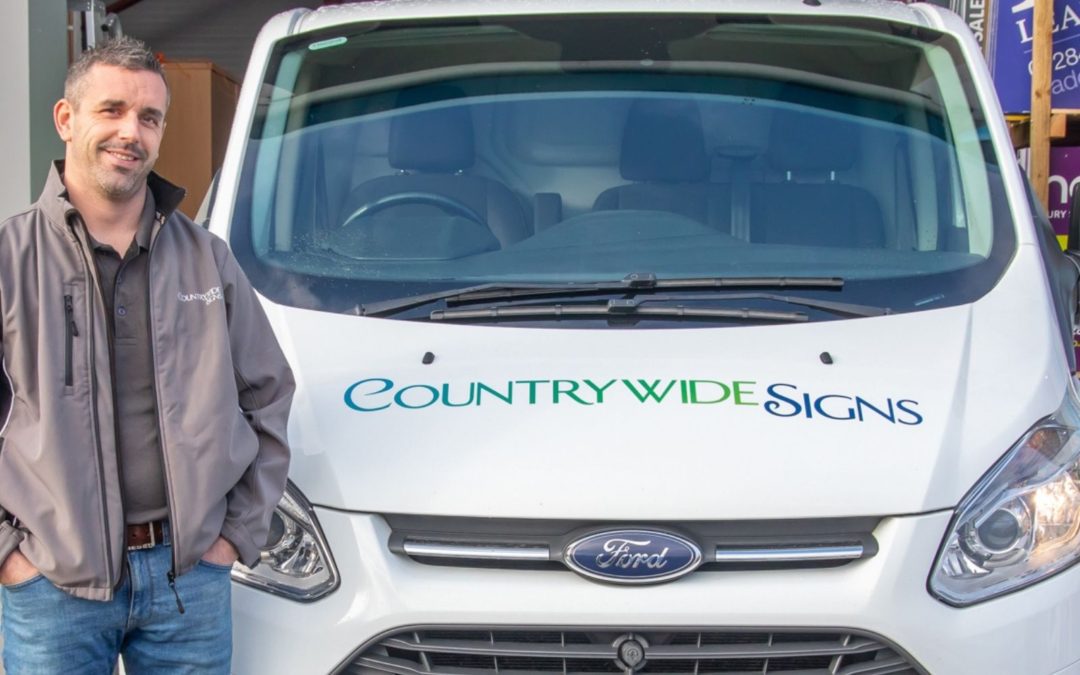 Operating with just one full-time and two part-time drivers, Countrywide Signs franchisee Lee Rathbone, has doubled his customer-base since taking on an existing operation in Norfolk. He is a great example of not just a man with a van, but a man with a plan!

Back in 2015 when Lee was working as a carpenter, the company he worked for unfortunately went into administration. Sad news for the business Lee was working for but for Lee, the redundancy opened up a whole new set of opportunities including the chance to become his own boss some two years later.

Lee changed his career and became a driver for Countrywide Signs working for the then franchise owner. Two years operating as a property sign installer, Lee found himself in a position to buy the franchise. The existing franchise owner had decided to retire, so Lee stepped in
“The opportunity presented itself at the perfect time,” commented Lee. “I really wanted to take the leap to work for myself. As I was already working for the company, I felt it was the perfect opportunity to own my own business.”

Lee had been erecting property signs and managing his own workload already and understood the inner workings of the business. His hands-on experience and communication with the customers meant he had already built some great relationships within the sector as well as built an outstanding reputation for himself.

Lee became the owner in 2017 and over the past few years has grown his business at an impressive rate. Growing from a franchise with 42 agents to 88 separate offices has been an impressive achievement. Especially since the best part of two years has been during a pandemic.

In the early days, Lee operated with one full time driver (which was himself) and also a part time driver two to three days per week. He now manages the Norfolk and East Suffolk territory area with one full time driver and two part time drivers. Lee added: “We work for some of the biggest agents in the area. These include some well-known names in the estate and lettings sector. Such as Sowerbys, Minors and Brady, Abbot Fox, Starking & Watson, Watsons, and Ange & Co. The list goes on. The team does a great job, and we receive some even better feedback.”

Lee is naturally business minded. He has ambition, a great work ethic and the foresight to see the bigger picture through application and hard graft.

“Long-term I would like to have even more estate agents on my books and more vans on the road. The aim is to grow, so we are not just the best at what we do in the whole of Norfolk and Suffolk but also the biggest. Most importantly, however, is to maintain our high standards. What satisfies me the most is knowing that our agents are happy with the service they receive. There’s no point in growing too quickly at the cost of risking a detrimental impact on our existing agents. We’re really proud of our 5 star-rating. We have always gone the extra mile to ensure our agents receive an efficient and quality service every time and we plan to keep this up.”

Are you in need of property sign installation in the Norfolk and Suffolk area? Or do you need representation somewhere else in the country? Why not search for your local property signage expert.

We use cookies on our website to give you the most relevant experience by remembering your preferences and repeat visits. By clicking “Accept All”, you consent to the use of ALL the cookies. However, you may visit "Cookie Settings" to provide a controlled consent.
Cookie SettingsAccept All
Manage consent

This website uses cookies to improve your experience while you navigate through the website. Out of these, the cookies that are categorized as necessary are stored on your browser as they are essential for the working of basic functionalities of the website. We also use third-party cookies that help us analyze and understand how you use this website. These cookies will be stored in your browser only with your consent. You also have the option to opt-out of these cookies. But opting out of some of these cookies may affect your browsing experience.
Necessary Always Enabled
Necessary cookies are absolutely essential for the website to function properly. These cookies ensure basic functionalities and security features of the website, anonymously.
Functional
Functional cookies help to perform certain functionalities like sharing the content of the website on social media platforms, collect feedbacks, and other third-party features.
Performance
Performance cookies are used to understand and analyze the key performance indexes of the website which helps in delivering a better user experience for the visitors.
Analytics
Analytical cookies are used to understand how visitors interact with the website. These cookies help provide information on metrics the number of visitors, bounce rate, traffic source, etc.
Advertisement
Advertisement cookies are used to provide visitors with relevant ads and marketing campaigns. These cookies track visitors across websites and collect information to provide customized ads.
Others
Other uncategorized cookies are those that are being analyzed and have not been classified into a category as yet.
SAVE & ACCEPT